Typhoon RAI was formed on December 13th, 2021 in the Pacific Ocean and developed to “Super Typhoon”, the strongest class thereafter. It made landfall on Siargao Island and passed the central part of the Philippines including Cebu Island and Bohol Island to the west of the archipelago. According to JTWC (Joint Typhoon Warning Center) of the U.S. Navy, the record shows 72 km/h at the highest immediately before the landfall.

As of December 20 morning, the death toll surged to 169 and over 50 people are still missing. Roads and utilities are cut off everywhere and over 300,000 people were evacuated. As the country has a lot of small islands and the communication lines are interrupted thus it’s very difficult to grasp the exact scale of damage right now.

The chart below is the map of the central part of the Philippines on which major posts on social media are plotted by Spectee. There were a lot of posts from Cebu Island maybe because the population size is relatively big and the damage is huge. Big pain to see the valuable resources for daily life such as houses and boats are destroyed terribly. We can see, in Kabankalan on Neglos Island, there was a severe flood that turned the streets into the river.

As countries with a lot of natural disasters

Same as Japan, the Philippines is one of the world’s most disaster-prone countries. Located along the boundary of big tectonic plates and on the typhoon alley, the country suffers from floods, landslides, earthquakes and volcano eruptions. According to the World Risk Report issued by United Nations University, the risk index of the Philippines is 3rd in 172 countries in 2018 and 8th in 181 countries in 2021. What is different from Japan is the economy of the Philippines is not fully developed yet and so many poor people are impacted by such disasters because of insufficient countermeasures both in hardware and software. The Japanese government, through JICA (Japan International Cooperation Agency), has been providing various projects to assist the country to improve their ability to cope with natural disasters for a long time and there seems to be a strong bond and special relationship between the two countries. Below is the long list of the projects between Japan and the Philippines after 2000.

Japan is one of the most disaster-prone countries and its amount of loss per capita is the highest in the world. Meanwhile, we cannot deny that this severe natural environment brings to us a great profit such as the beauty of the scenery of each season, an unlimited variety of delicious foods, and wonderful culture fostered under this condition. We have to live with natural disasters. Furthermore, Japan is proud of its great technical capabilities. In this country, we would like to develop the new technology to fight against disasters and expand it to a global scale…Spectee members are tackling every day with this wish in our minds.

Lastly, our sincere condolences to all those affected.

Analyze social media and visualize the crisis at once! Reliable crisis management service (Only in Japan now)

Spectee Pro, real-time crisis management service provided by Spectee Inc., is widely used by governments, local municipalities, enterprises and mass media to detect the incident happened and visualize the situation ongoing with its speediness, accuracy and comprehensiveness. Spectee’s AI technology can analyze big data and make it clear “what is happening at which location”. 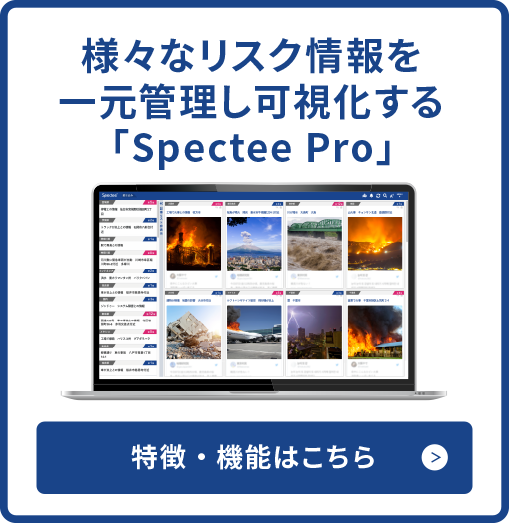